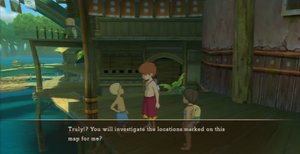 A young boy in Castaway Cove has found a pirate's treasure map, and is keen to investigate the locations marked on it.

This errand is available to complete after completing the main story.

In Castaway Cove, make your way over to just outside the Cat's Cradle and talk to the little boy. He's found a treasure map, and wants you to find the treasures since his mom won't let him. There are seven places marked on the map, and as we'll find out, each one pinpoints the location of one of the stone tablets we've come across several times in our journey. You can talk to the people in town if you want regarding the locations, or you can just read along right here:

Return to Castaway Cove after discovering the six sets of letters, and the boy will wonder if you can decipher it all for him. If you put it all in alphanumeric order, you get this... which if you put the second character under the first, you get this: 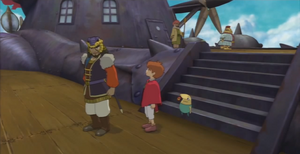 So enter "KUBLAI3", which stands for Kublai Khan the Third! Make your way to the Iron Wyvern and talk to Kublai on the western side of the ship. He'll tell you the tell on Kublai Khan the Third, who'll tell you of one last treasure in the depths of a forest on an island that no ship could reach. Travel to the Tombstone Trail, then fly on Tengri to the northeast. Have him drop you off in the center of The Broken Crown, then examine the monument and use 'Rejuvenate' to bring the text back.

Once you've read it, return to Castaway Cove and talk to the boy one last time to end this mini adventure. You'll receive a bunch of formula in addition to the usual treasure for completion.

Retrieved from "https://ninokuni.fandom.com/wiki/Errand_070?oldid=11577"
Community content is available under CC-BY-SA unless otherwise noted.