Start a Wiki
watch 01:31
The Loop (Games)
Do you like this video?
Esther (マル Maru) is a songstress who joins Oliver on his quest. She is the daughter of the Great Sage, Rashaad. Esther is known to have a fiery personality, which causes her and Swaine to butt heads frequently. Her real-world soulmate is a shy girl named Myrtle, who is nicknamed Starey-Mary by the children because she never leaves her room and always looks out her window.

She initially had part of her heart removed by Shadar, but Oliver helps her return to her former self.

Esther has blonde hair in a ponytail and blue eyes. She a dark indigo crop top with a gold neck collar and light purple short sleeves a matching dark indigo skirt with a gold band near the bottom pink puffy pants with gold bands at the legs and orange dancers' slippers. At the Winter Isles, she wears a pink coat with fluffy white edges. In Castaway Cove she wears a blue bikini with a purple towel skirt around her waist.

Like Oliver, Esther is a spellcasting ranged combatant. Whereas Oliver plays like a black mage with his offensive spells, Esther's spells are mostly based around improving allies' stats and healing like a white mage.

Esther has an affinity with Aves, Flora, and Aquatica familiars.

Esther/Sherry uses a harp which she can use to attack enemies. She also has songs, which can be utilized to heal allies or apply buffs. Furthermore, her harp can be used to capture lovestruck monsters through the use of "Serenading". 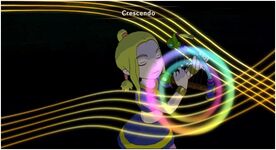 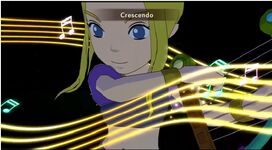 Esther's Miracle Move
Add a photo to this gallery

When we first meet Esther in Al Mamoon, she is wearing an indigo outfit, which she wears consistently throughout the game. The only times she changes is in Castaway Cove (when she gets a rather stylish blue bikini with a purple towel skirt around her waist) and in Yule (where she gets a thick coat very similar to Oliver's but in pink).

Retrieved from "https://ninokuni.fandom.com/wiki/Esther?oldid=19580"
Community content is available under CC-BY-SA unless otherwise noted.