View source
watch 03:01
Wiki Targeted (Games)
Do you like this video?
Play Sound

The Conductor (あんないにん Guide) appears at different times in the NDS and PS3 games. The online nickname for his world, for the NDS game, is simply "夢の世界 dream world".

Ni no Kuni: Wrath of the White Witch

He appears in a forested glen postgame where you'll find the diary that has been misplaced for the umpteenth time.

Upon speaking with him he'll inform you that rifts have opened all over the world. You then can take on new bounty hunts at Swift Solutions that pitch you against beefed up versions of most of the game's bosses, though the Nightmares, Shadar and The White Witch are missing from this line-up

Sealing the first batch unlocks the second which in turn unlocks the last rift. the Conductor then opens the door, leading to a unique location via a long corridor (note the murals) where you'll fight the first battle against the Guardian of Worlds.

After defeating the guardian, the Conductor/Guide tells you to open another door that leads to a parallel version of Motorville. Things are a little different, and there doesn't seem to be a soulmate for Oliver.

After chasing him throughout the town he'll hand you the keys to the Philmobile (Phil's car), and reveals that he is the Oliver of that alternate Motorville. Because Alicia didn't travel to this world, he wasn't saved from Shadar and became a lost soul. He journeyed to a place where lost souls gather, chose this form, and then sought out Oliver.

Differences between the two Motorville

Ni no Kuni: Dominion of the Dark Djinn

Anytime after your first stay at the inn, you'll sometimes be transported to his world while you sleep at one. When Oliver asks "Where is this place?" he answers "ここは 夜と朝のスキマの世界さ This place is the world in the gap between evening and morning". However the background image of this "world" is the same illustration as on page 263 of the Japanese version of the Wizard's Companion.

The Nazcaän Script is drawn into the background just as in the illustration, for example it appears on giant mushrooms.

If you speak to the Conductor and choose the first option, he'll ask you a question. This repeats itself, with better rewards for every question answered. After answering correctly you'll be woken up and find yourself back at the inn, so he only asks one question per visit: 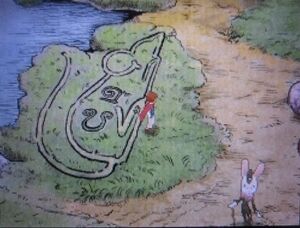 Ni No Kuni 2: The Revenant Kingdom

In this game more is revealed of his background and motives in the Tale of the Timeless Tome DLC. It is revealed that he was the "God of Gods" first attempt at making humans, but he was failure and has no definite form as a result. He also considers himself the ancestor of mankind because of this he feels the need to protect humanity against evil no matter where or when. In this game he reveals that there are many realities and that he is able to hop between them, and that he is looking for what he dubs Saviors. He is first introduced when Tani informs Evan that there is a rabbit like man appearing in other peoples dreams when they sleep at inns. He soon encounters the players when they sleep at an inn but has to run away due to the nightmares. This happens numerous times until the player creates their own inn, he also helps them in the creation of the Wizard's Companion Martial Method. He also helps them learn the Materialize spell to create items that hold special meaning. With this he helps the player navigate the memories of their comrades in order to collect all of the High Higgledies in order to defeat the source of the tainted and free the God of Gods from that tainted corruption. With his job done he is content and remains in the dreamscape for some time.

Community content is available under CC-BY-SA unless otherwise noted.
Advertisement