The Summerlands (ミド大陸 Middle Continent) is one of the four major continents of Ni no Kuni, and has been placed in the middle amongst them. It is the largest continent of the four but is divided into two smaller sections: North Summerlands and South Summerlands.

To the north, it is home to the city of Ding Dong Dell and the Deep Dark Wood, where Old Father Oak lives. To the south, it is home to places such as the kingdom of Al Mamoon and the coastal city of Castaway Cove, to the Temple of Trials, and natural formations like Old Smoky, a volcano not far from Al Mamoon.

The Summerlands is a major continent and is located in the center of the world map, divided into North and South. The general location is famous for its heated weather, even including dry desert in it's selection of sites. Within its northern half, the climate consists of lots of greenery, particularly hills, and deep forests. In its southern half is the well-known desert area, full of freshly grown babanas; as well as a volcano to the south to add heat. The area additionally holds a southern coastline full of wetlands and beaches fit for fishing and swimming.

The northern area typically holds a mild climate all year round. As such, there is lots of lush vegetation to enable deep forestry, easily grown gardens, and agriculture. Resultantly, diverse wildlife also inhabits the northern half, with a variety of creatures inhabiting the hills and the more mountainous area.

In comparison, the southern environment is much more heated, particularly being affected by the nearby volcano that wades off high temperatures. Despite the dry atmosphere, the deserts are well known for the fruit they grow. Further down from the deserts are beaches and wetlands, full of water and better soil for plants. 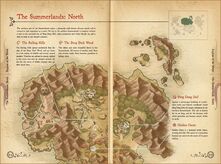 Pages from the Wizards Companion describing the North Summerlands. 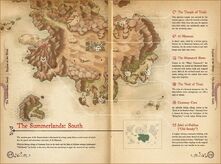 Pages describing the South of the Summerlands.
Add a photo to this gallery
Retrieved from "https://ninokuni.fandom.com/wiki/The_Summerlands?oldid=18464"
Community content is available under CC-BY-SA unless otherwise noted.